Specifies the maximum number of interactions that clients can select in a snapshot.


If this option is set to 'ignore', Interaction Server ignores the place name specified in RequestAgentLogin and replaces it with the agent identifier. The place with the same name as the agent identifier must be present in the configuration. This option must only be set to 'ignore' in environments with multiple Interaction Servers serving the same tenant. Be aware that setting this option to 'ignore' might compromise the accuracy of reporting in cases where Interaction Server simply forwards data provided by other applications – for example, Focus Time reporting, where the reporting data is actually provided by Workspace Desktop Edition (WDE).


Specifies whether Interaction Server should automatically make an agent Not Ready on media if delivering-timeout expires while attempting to deliver an interaction to an agent as a result of routing. If an agent does not respond within this timeout after receiving an invitation to handle an interaction (EventInvite), the interaction is revoked. Setting the option to true causes Interaction Server to automatically make the agent Not Ready for the media in this situation. Setting the option to false means nothing will be done. A value of dnd-on means the agent’s DoNotDisturb state will be set (and nothing will be delivered to the agent afterward). A value of all-media means all media will be set to Not Ready.


Specifies, in minutes, the maximum inactivity period for an agent before he is automatically logged out. Any request from the agent reset the timeout.

Each server node in an Interaction Server cluster has its own interaction database and its own event log databases (or other types of Event Logger). And each node must be configured in pairs, with one server configured as primary and the other as backup.

The proxy routes requests to the appropriate server or servers within a cluster, based on the cluster configuration and on the interaction identifier or agent specified in the request.

By dividing the incoming stream of interactions between multiple servers and databases, the cluster can be scaled to support a greater number of interactions than a single Interaction Server with a single database. 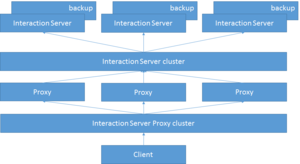 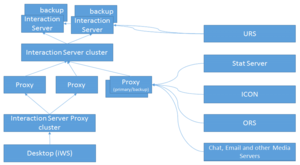 Media servers (including chat and e-mail) should be connected to a primary/backup pair of Interaction Server Proxies. Depending on the expected load, media server can share a pair of Proxies with other applications or can use a dedicated pair.

Universal Routing Server (URS) should be connected directly to all primary Interaction Servers in the cluster.

Timeout for Pull for Strategy

You can tune the way that the cluster responds to pull requests from routing clients.

Setting the Proxy option to a relatively low value can help speed up operation in situations in which one server has no interactions and the Proxy must wait for its response before going on to the next server in the cluster.

Interactions submitted to a given Interaction Server node cannot be processed by any other node. Therefore, if you want redundancy of any kind, you have to deploy each node as a primary/backup pair, which gives you the level of reliability provided by the standard Genesys primary/backup functionality.

Important: A node for which both primary and backup Interaction Servers are down, or whose single node database is down, cannot process interactions, and no other nodes can complete any interactions that were in progress on this node. This also applies to the node's event log. If the event log database is not accessible for a significant time period, then events are lost.

Because each primary/backup pair works with its own database and the proxy requests interactions from the same queue in a round robin fashion, the order of interactions could be broken. This limitation is more important for long-lived interactions and large backlogs. For deployments with low volume and no backlog it is not very important.

In Diagram 1, two nodes handle the same type of interactions using the same business process and both handle the same queue Q1. Both servers maintain the ordering of the interactions, and respond to pull requests by the proxy in the correct order. But the order as seen by the client may not be correct, as the proxy has no way of tracking or handling the order correctly (it does take account of the semantics of order definition) and, therefore, cannot request the appropriate server (for example, to get older interactions or interactions with higher priority as defined by the interaction View order).

The same is true for URS, where each node pushes interactions from its own database in the correct order, but the order of routing of interactions by the URS is different. This also applies to the segmentation feature of an interaction View.

In certain situations, for example, when URS and interaction View use the same order by priority, URS can rectify the situation by processing interactions internally in the correct order, and, therefore, allowing one of the servers to push more interactions with higher priority.

If URS or ORS or any other client that pulls interactions from an interaction View does not impose its own order of processing, but relies solely on the order provided by Interaction Server (or, in this case, by the proxy), the imbalance between the servers may increase in time, because there is no synchronization point unless the queues become empty. In other words, the situation with broken queue order may be acceptable for short-lived interactions, like chat, and less acceptable for long living interactions, like email.

Obviously, if different nodes process different types of interactions, and as a result, only one server in the cluster maintains the order of some specific queue, there is no such problem. For example, in Diagram 2, the client pulls from different queues defined for different solutions and both streams are provided in the correct order.

Because clients can provide their own interaction IDs, it is possible that interactions with the same ID may be submitted to different nodes at some point when the cluster cannot check for duplicates. This issue does not arise if interaction identifiers are generated by the cluster itself (by any node in the cluster) or by eServices components (since they all follow a schema that provides uniqueness within a single configuration environment). But if customers wish to generate IDs themselves, they must guarantee that the IDs are unique.

No Definite Reply to Some Operations Regarding Interaction Existence

Interaction is not accessible

If some node in the cluster is down (even for a short time, for example, due to switchover or host restart) the proxy cannot definitely tell if some interaction exists or not. In this case, the proxy generates a new error (Interaction is not accessible) when it cannot contact all the nodes in the cluster. In the figure at right, the first and second nodes provide negative replies, but the proxy receives no reply from the third node, and therefore the proxy cannot definitely tell the client that the interaction is not found.

In certain cases, a proxy might already have information about which server processed an interaction with a specific ID in its cache. In this case, the proxy only contacts the server that it has identified as having processed the interaction, and even if some nodes are down, it still may reply with the definitive answer (Interaction does not exist). But, generally, the proxy may restart or a new proxy can be instantiated, and in that case its cache is initially empty and it still needs to broadcast to all servers to try and find the interaction.

Because URS is connected directly to each primary/backup Interaction Server in the cluster, it only sends requests (including ESP requests) to the server it received the EventRouteRequest from, and this limits the scope of these requests. For example, the ESP request FindInteraction can only access interactions in the context of a single node. However, in many situations this might be acceptable since the context of such URS requests is logically limited to the same scope.

Increased Limits for Some Operations

For certain requests, for example, RequestFindInteractions, RequestGetWorkbinContent, that use configured limits for the maximum number of interactions that Interaction Server can return in request, those limits are not enforced in a cluster configuration. This is because, by design, the proxy forwards the same request to all relevant servers and then merges the replies. In the worst-case scenario, the number of returned interactions might be a multiple of the number of nodes.

In some specific scenarios, such as searching by external id, a short set of data from only one node may be sent back to the Desktop client.

However, if only one node handles a specific media type, then limits are enforced just as they are with a single Interaction Server deployment.

Incorrect Order of Interactions in Some Requests

The EventWorkbinContent or EventInteractionsFound event, in cases when multiple servers return the results, contain interactions out of order after the proxy merges the results. This is because ordering and filtering are handled by the database and not by the server or proxy, which do not take account of the semantics of the condition and order. The desktop should sort the result in this case.

There are two options for configuring the event logs in the cluster:

The first option has some limitations:

Note that since specific interactions are processed by a specific server, the issue of overlapping event pairs does not exist for interactions or ESP reporting events.

As an example, suppose you have 100 available agent-seat licenses and four nodes. If you set ics_multi_media_agent_seat to 30 in every node, then three nodes will allocate 30+30+30 licenses, and the fourth node will allocate the remaining 10. Then with all nodes running, 10 will be the maximum number of agents who can log in to the Cluster.

Capture Points are configured per node and the limitation is that each Capture Point can only access interactions that are processed by the node for which it is configured. That is certainly acceptable for a configuration in which nodes are configured to handle a specific media type/solution exclusively, and no two nodes handle the same media type. In this case, all Capture Point operations should work, including operations that request information from the server.

Because each Capture Point is limited to visibility of only one node, requests that are intended to request data from Interaction Server might not work correctly. For example, the request to Get Interaction/Task properties might be received by a Capture Point other than the one that created the interaction: the request would fail, even though the interaction might still exist in the database of the other node.

In a cluster deployment, SSJE can only receive data from one Interaction Server.

ESP Configuration Must Be Symmetrical

All servers serving the same tenant and media type should have connections to the same ESP servers to avoid a situation in which one Interaction Server can execute a particular ESP request and another cannot.

Interaction Server Proxy handles some Agent state information internally, and may instantly respond to client requests. New error codes, applying to specific scenarios and conditions, have been introduced because of this change of behavior. Client applications must be adjusted so as to handle these error codes. The codes are as follows:

The proxy processes many requests by routing them to one or many Interaction Servers, based on data contained in the request. The proxy gets the tenant ID, media type, and interaction ID from the request (including ESP requests) in a generic way. Based on the values of these attributes, the proxy selects the Interaction Server.

Most of the time, the error message is the generic Interaction is not accessible.