The Siemens OpenScape PBX can be configured to operate in a SIP Business Continuity configuration. There are two supported modes: 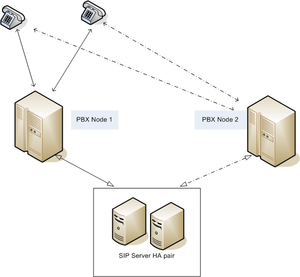 To support the split-node configuration, all OpenScape Voice (or PBX) nodes are represented in the configuration environment as a single Voice over IP Service object with the service-type option set to softswitch.

All PBX nodes share the same FQDN, which could be resolved through the DNS SRV records. DNS SRV records must be administered in such a way that the IP address of the node, in which endpoints are registered by default, has the highest priority. SIP Server tests the availability of all resolved addresses by using OPTION requests. The available address with the highest priority is used for SIP communication. If the original node fails, endpoints are re-registered at an alternative node. SIP Server starts using the alternative node when it discovers that the original node is not available.

Verification of split-node functionality was done with geographically-separated nodes that were configured without RG8700 as a SIP Proxy Server.