Genesys Task Routing (GTR) includes a sample Designer application that you can use as a starting point to help meet your custom requirements for task routing. The application also includes a simplified Open Media Routing Data Table (called OPEN_MEDIA_ROUTING_CONFIG) to map the routing tasks based on agent, skill, agent group, and so on.

The sample application routes tasks to agents based on attributes you specify on the workitem interaction and information included in the Open Media Routing Data Table. It has four routing cascades that run in the following order:

The application works based on the assumption that all workitems are pre-classified in the third-party system before integrating with GTR. You can read more about this in Input values.

Using the Open Media Routing Table, you can configure specific values for agents, skills, and agent groups, or set a default mapping instead. If the interactions have more than one row, you can define a default row as routing precedence. You can also override the default routing table by specifying the requested agent, skill, or agent group directly in the interaction user data.

Complete the following steps before you get started:

To complete the setup, edit the sample application and click the Initialize header. Set the default value for the overrideKeyName variable — you can get this value from the Transactions Override Attached Data Key in Agent Setup.

Once the application is imported, you can find the OPEN_MEDIA_ROUTING_CONFIG table under Business Controls > Data Tables.

In the image above:

To work with the sample application, make sure your third-party system adapter adds the following user data keys on the workitem interaction:

Together these three attributes form a compound key that is used to get the Agent, Skill Expression, and Agent Group values from the routing table. If you don't provide values for these attributes, the sample application uses the default mapping (see Configure the routing table above).

You can also override the default routing table values for Agent, Skill Expression, and Agent Group by specifying values for these fields with the following user data keys: 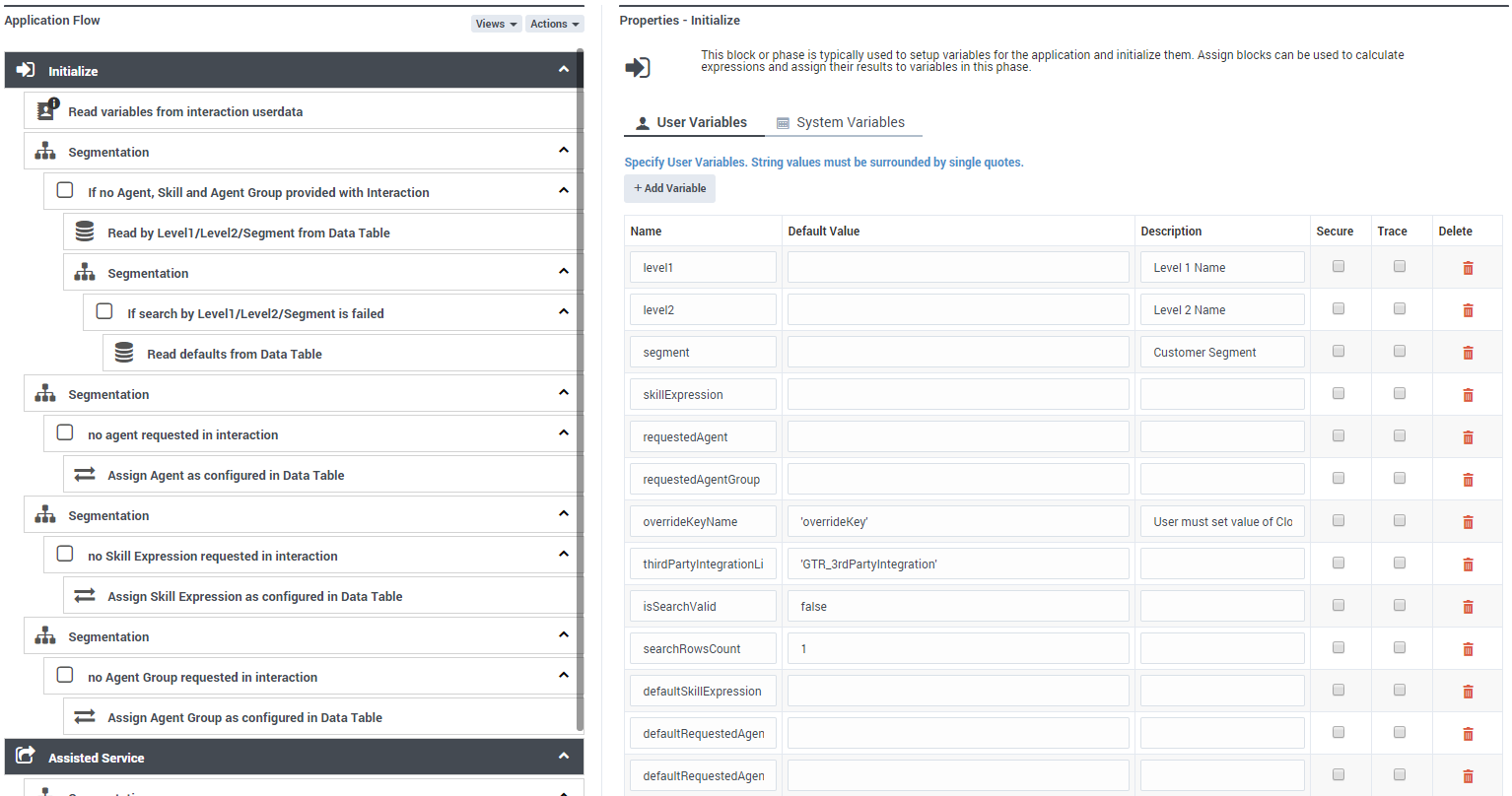 In the Initialize phase, the sample application goes through the following setup: 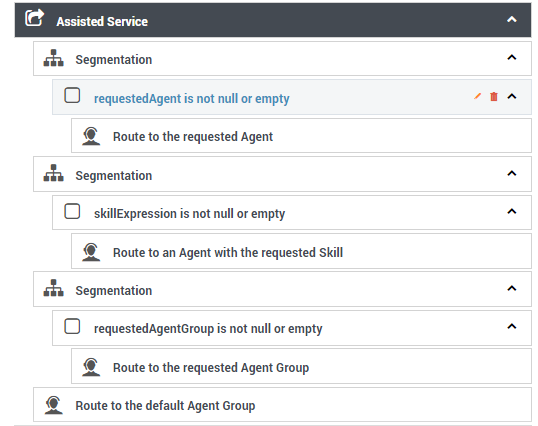 In the Assisted Service phase, the application follows four routing cascades in this order:

The first three routing cascades are a sequence of Segmentation blocks that perform null checks and route to the appropriate agent or agent group. The last cascade, Route to the default Agent Group, uses the workitems agent group you created in Prerequisites. As mentioned previously, you can also set another default group name here to suit your custom needs.

All Route blocks use a 120-second timeout by default. You can adjust this value and enhance the routing data table and application to specify timeouts for the Level1, Level2, and Customer Segment fields.

Warning
Genesys does not recommend values below 120 seconds.
Genesys Task Routing setupPureEngage Cloud APIs
This page was last edited on April 18, 2019, at 18:52.