In Premier Edition Cloud, short calls are calls that are abandoned very quickly, so they must not count against the Service Level.

In Premier Edition Cloud, the total amount of time (usually measured in seconds) that it takes for a call to be answered by an agent.

In Workforce Management (WFM), a customer service goal that is defined as the percentage of interactions that are handled within a time limit.
In Universal Routing, using a Service Level routing object in a voice strategy enables you to select or create a routing rule that specifies a service factor for a customer segment. For example, you may want to distribute 60 percent of interactions in less than 10 seconds to a specific agent group.

In Premier Edition Cloud, a type of functionality found in the Settings view in VCC Dashboard, which allows a contact center administrator to configure a service level for each skill within that contact center.

Indicates the type of activity that an agent either has performed or is currently performing. The mode that an agent is in (for example, Ready, Not Ready, After-Call Work, Unavailable, Do Not Disturb, and so on).
In Premier Edition Cloud, the status can be set by the agent or assigned by supervisors. This information is used to monitor agent performance or for data used in both real-time and historical reporting.

A request for an agent to return a customer’s call. The request can be initiated by an agent or by a customer.

Also known as AHT. The average amount of time an agent takes to respond to incoming interactions.

Known as Average Handling Time in Premier Edition Cloud, this is the average amount of time an agent takes to handle a call for this day. This statistic is counted for the day. The following is a list of valid agent activities for this state:

In Premier Edition Cloud, a statistic that provides the longest time (amongst all agents that are logged in) that any agent with a specific skill was in the Ready status.

In Premier Edition Cloud, a statistic that provides the current average amount of time that callers currently spend waiting for agent interaction in a specific queue or for a specific skill. This statistic only reference calls currently in the ACD queue.

In Premier Edition Cloud, the longest waiting time spent by a call currently waiting in a queue.

In Premier Edition Cloud, a count of unique calls that were not answered by at least one agent. The following conditions apply:

In Premier Edition Cloud, a statistic that provides the current number of calls waiting for a specific queue.

In Premier Edition Cloud, the total amount of time (usually measured in seconds) that it takes for a call to be answered by an agent.

In Premier Edition Cloud, a statistic that provides the target Service Level for a specific queue, if configured by your contact center administrator.

In Premier Edition Cloud, a type of functionality found in the Settings view in VCC Dashboard, which allows a contact center administrator to configure a service level for each skill within that contact center.

The Skills section displays the statistical information for the skills assigned to your team (supervisor) or contact center (administrator). 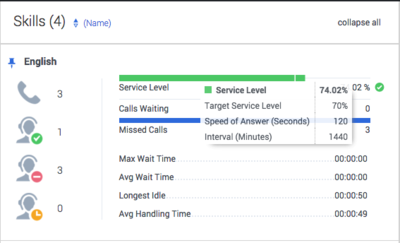 The following statistics are available: 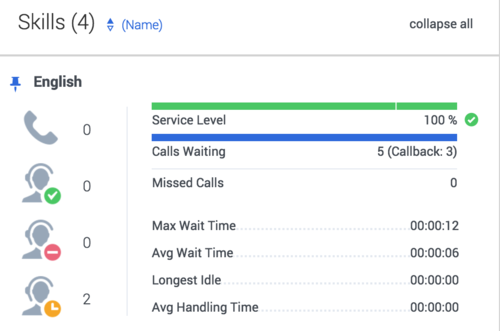 What are the agent states?

The left side of the Skills section displays the number of agents assigned to this particular skill and their corresponding agent status. Each agent status is represented by one of the following status icons:

This information is updated when an agent performs a skill-based transfer to a new skill. The status of the agent who initiated the transfer displays as After Call Work or Ready (depending on the value set by the administrator for the wrap-up time, which is set using Settings > Desktop > Permissions).

What is the difference between the Busy and In Call states?

The graphic and examples below explain the differences between the Busy and In Call statuses: 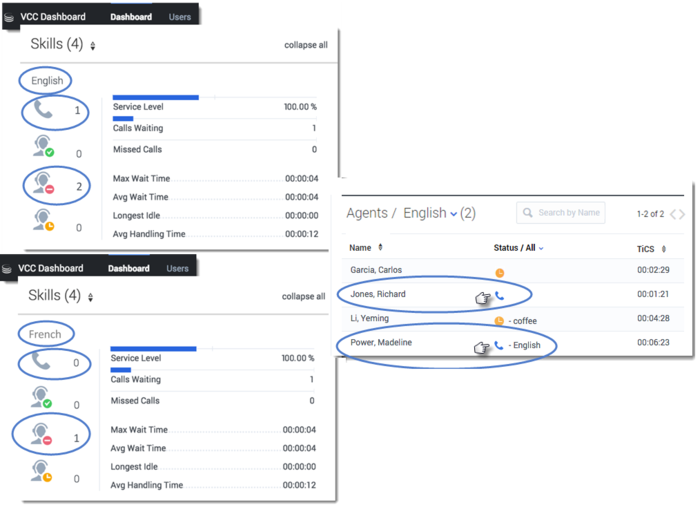 Agent Madeline Power is assigned with both English and French skills. A call gets routed to the English skill and she receives the call.

Agent Richard Jones is assigned with the English skill and has to call someone, so he is handling an outbound call.

How do I filter agents by skills?

In a Skill widget, clicke of the status icons to filter the list of agents with this skill and status in the Agents panel that appears to the right. 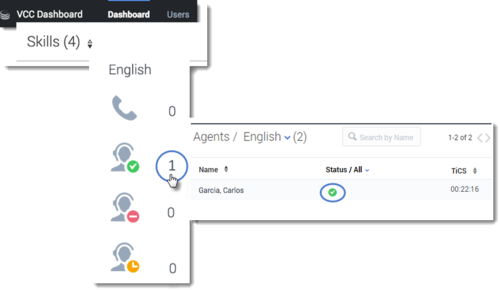 Important
You can't use the In Call

icon as a shortcut to filter the Agents panel, as it's a subset of the Busy status. You can click the Busy

icon to filter the Agents panel.

What is the Skills Service Level?

The Skill Service Level enables you to monitor the skill service level for each skill.

The Service Level is defined as the percentage (%) of all calls over the defined interval (time period — a moving window that is configurable) that were answered by agents within X seconds, where X is the defined Speed of Answer and is configurable — for example, a call is included in the total number of calls if the caller waits in queue for a configurable amount of time (measured in seconds), even if the caller hangs up (abandons the call) before the call is sent to an agent.

What are the statistical data refresh rates?

The Skills statistical data refresh rates are as follows:

Important
There might be a 10-second delay in the refresh rate between the agent status count in the Skills section and the agent appearing in the agent panel.
eServicesAgents
This page was last edited on June 30, 2017, at 11:16.